Weng Yow Lee introduces us to Tan Wah Piow, an ex-detainee in the Singaporean equivalent to Operasi Lalang who has since written two books documenting his experiences, and work as an activist.

“It is not a practice, nor will I allow subversives to get away by insisting that I’ve got to prove everything against them in a court of law or evidence that will stand up to the strict rules of evidence of a court of law.” (Lee Kuan Yew on arrests and detention without trial, during a meeting with Archbishop Yong, the Head of the Singapore Catholic Church, source: “PM: Not our practice to take subversives to court”. The Straits Times: p. 10. 3 June 1987.)

A quarter of a century ago, the Singapore Government launched Operation Spectrum, a covert security operation to arrest and detain 22 people without trial under Singapore’s Internal Security Act for the alleged offence of being involved in a “Marxist Conspiracy to subvert the existing social and political system in Singapore using the communist united front tactics” – a reference to the strategies and methods of the Malayan Communist Party. The arrests and detentions of a group of people from different segments of society such as church and volunteer workers, professionals, and theatre practitioners took place within the period when a series of economic and political events had begun to rock the sure footing and invincibility of the PAP, such as the disastrous 1981 Anson by-election defeat and the economic recession which had begun to increase unemployment among Singaporeans.

The Singapore Government had alleged the mastermind of the 1987 Marxist Conspiracy to be Tan Wah Piow, a young bespectacled 35 year old man, who at the time, was embarking on his student life as an undergraduate law student at Oxford University, and who was previously Student President at the National University of Singapore in 1974. He later exiled himself to London in 1976 as a result of imminent threats made by the Singapore Government to forcibly conscript him into the National Service. Today, much has been written in blogs and mainstream press about the role Tan Wah Piow played in the 1987 Marxist Conspiracy. However, this article does not intend to dissect or rebut what has already been written. Instead, it serves as a personal reflection of the person I had first known as a 12 year old boy who went to London with his parents for a holiday.

When I first met Tan Wah Piow (or Uncle Wah Piow as I had always affectionately addressed him), the first impression I had of him so vividly (as if it was only yesterday), was a man who was well-dressed, humorous, witty, and provocative. Yet, for all the troubles and struggles of life he faced as a political exile – such as the revocation of his Singapore citizenship in 1987, the accusation by the Singapore Government of his role as the ‘mastermind’ of the 1987 Marxist Conspiracy, and the hard scrubbed years as a junior barrister in his 40s at the Inns of Court – he never failed to look cheerful, calm, relaxed and happy whenever I visited him with my parents.

In sharing with me about his activism and struggles as Student President of the National University of Singapore in 1974, and later, as the President of the Federation of United Kingdom and Eire Malaysian and Singapore Students’ Organisations (FUEMSSO), he is fond of saying that Singapore’s political history and activism have never been as sterile as it is now and that his struggles at the time was never to propagate any political ideologies or beliefs. But to campaign to protect and highlight the disenfranchised segments of Singaporean society whose rights and welfare were being ignored and disregarded by the Singapore Government.

In a nutshell, the person that the Singapore Government had made out (later in 1987) as a Marxist conspirator bent on subverting the social and political system in Singapore, would ironically, in Malaysia, be a member of the public coaxed to join the Bar Council My Constitution Committee or UndiMsia!, or various NGOs groups of his liking, and be treated as a human rights activist. How unfortunate that he had been born in Singapore instead of Malaysia! It is only because he and many others at the time were prepared to disregard the restrictions and curtailments placed by the Singapore Government on civil and political rights that today, he and many others have to face the consequence of been unable to return home to their beloved Singapore. At least, not without facing the risk of prolonged imprisonment for merely exercising their civil and political rights under the Singapore Constitution in the 70s and 80s. 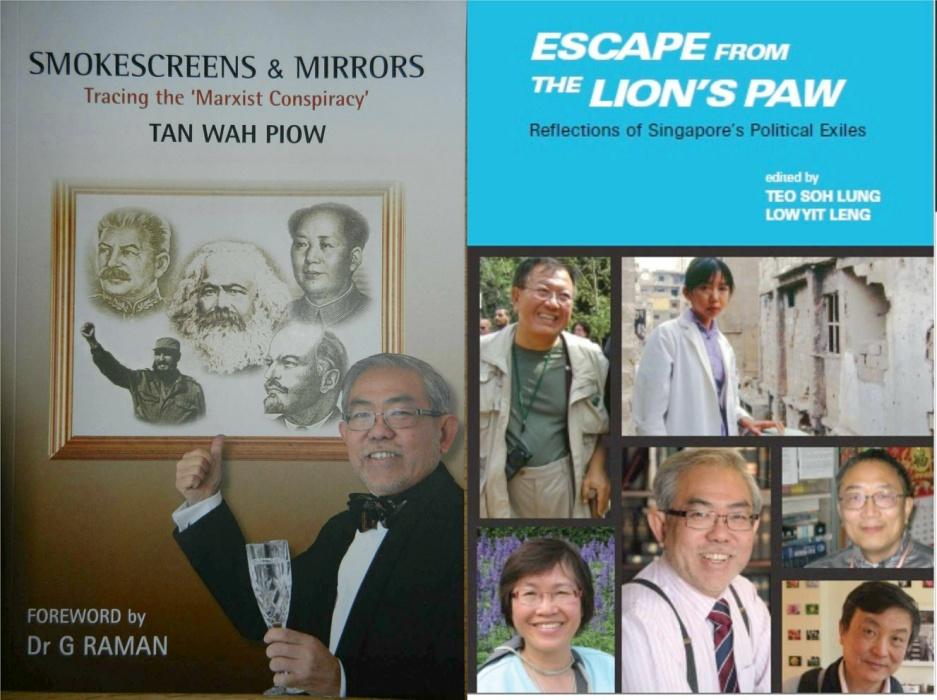 The two books to be launched this weekend

The 2 books compiled by him and other activists seek to:

As time passes by, memories of Tan Wah Piow and other veteran activists, of who they are and what they had to struggle through in their desire for change in Singapore, will start to fade away. Most of us will have heard of the infamous Operation Lalang in Malaysia involving the mass arrests of educational activists and politicians from both Barisan Nasional (BN) and the Opposition which occurred in October 1987. But many of us have not heard or read about Operation Spectrum which bore similarities in terms of modus operandi to Operation Lalang.

Both books serve primarily as a narrative and recollection of the tumultuous events that happened in Singapore in the 70s and 80s. But more importantly, it is my hope that these books will inspire us all and inject a renewed vigour to activists of our generation to push harder for the changes that each and every one of us wishes to see in Malaysia.

Press release for the Event – Here.

I wear the hat of a working man sensibilities on weekdays and an eager eye activist on weekends. I am not sure whether activism complements politics or vice-versa. Still searching for that answer.

Posted on 19 November 2012. You can follow any responses to this entry through the RSS 2.0.